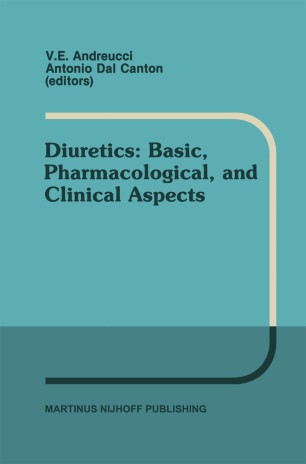 Proceedings of the International Meeting on Diuretics, Sorrento, Italy, May 26–30, 1986

Part of the Developments in Nephrology book series (DINE, volume 18)

The need for adequate means by which to improve urine output is very old. Even in the "Scuola Salernitana", the oldest medieval medical school in Western Europe, about 1000 years ago it was taught how to improve urine output. The list of known "diuretica" included herbs, plants, roots, vegetables, in particular asparagus, fennel and carrot. The first diuretic drugs, however, were mercurial compounds. Thus, calomel, mercurous chloride, was initially used as a diuretic in the sixteenth century by Paracelsus, being one of the ingredients of the so-called "Guy's Hospital pill". But calomel had a cathartic effect so that it was replaced by organic mercurial compounds. These diuretics were clearly toxic. After the discovery of the car­ bonic anhydrase, in the early 1930s, and the introduction of sulfanilamide as a chemotherapeutic agent, it was observed that this drug was inhibiting carbonic anhydrase in vitro and urinary acidification in vivo thereby causing metabolic acidosis; urine output, however, appeared to increase. Subsequent studies led to the synthesis of more potent analogs, in particular acetazolamide. Studies on car­ bonic anhydrase inhibitors led to the synthesis of benzothiadiazides which disclosed much less inactivating action on carbonic anhydrase and much more diuretic effect through an inhibition of tubular transport of sodium and chloride. Chlorothiazide was the first member of this class of diuretics. Thiazides are still used in clinical practice.