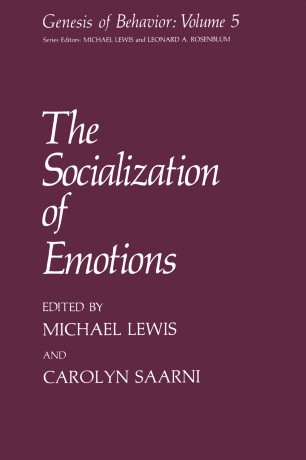 The Socialization of Emotions

Part of the Genesis of Behavior book series (GOBE, volume 5)

How are we to understand the complex forces that shape human behav­ ior? A variety of diverse perspectives, drawing on studies of human behavioral ontogeny, as well as on humanity's evolutionary heritage, seem to provide the best likelihood of success. It is in an attempt to synthesize such potentially disparate approaches to human develop­ ment into an integrated whole that we undertake this series on the genesis of behavior. In many respects, the incredible burgeoning of research in child development over the last decade or two seems like a thousand lines of inquiry spreading outward in an incoherent starburst of effort. The need exists to provide, on an ongoing basis, an arena of discourse within which the threads of continuity between those diverse lines of research on human development can be woven into a fabric of meaning and understanding. Scientists, scholars, and those who attempt to translate their efforts into the practical realities of the care and guidance of infants and children are the audience that we seek to reach. Each requires the opportunity to see-to the degree that our knowledge in given areas permits-various aspects of development in a coherent, integrated fash­ ion. It is hoped that this series-which will bring together research on infant biology, developing infant capacities, animal models, the impact of social, cultural, and familial forces on development, and the distorted products of such forces under certain circumstances-will serve these important social and scientific needs.