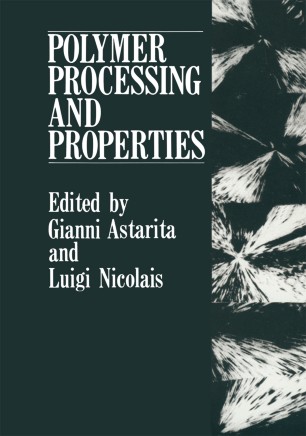 During the First Conference of European Rheologists, which was held in Graz, Austria, in April 1982, the Provisional Committee of European Delegates to the Inter­ national Committee on Rheology held a meeting to discuss future European activities in the general area of rheol­ ogy. It was agreed, among other things, that the organ­ ization of meetings in Europe on specific topics related to rheology would be done in cooperation, so as to avoid conflicts of dates and/or subject areas. Any such meeting, if approved by the Provisional Committee, would be named a European Meeting; the European Societies of Rheology would help the organizers with distribution 6f circulars, membership lists, and any required technical assistance. One of the very first meetings organized within this procedural scheme has been the European Meeting on Polymer Processing and Properties, which was held in Capri, Italy, on June 13-16, 1983. This book constitutes the Proceedings of that meeting.