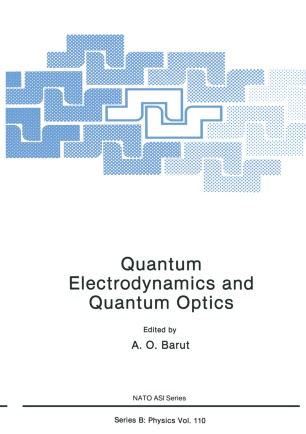 The borderline of quantum electrodynamics and quantum optics offer spectacular results and problems concerning the foundations of radiation theory. Perhaps the major new viewpoint that has emerged from recent investigations is that one can now work inside a time-dependent quantum process, whereas up to now all elementary quantum processes were either stationary, or one worked with asymptotic in-and out-states, i.e. an S-matrix approach. In the-rirst part of this volume, the Quantum Electrodynamics, the present status of the main approaches to this most accurate of all physical theories are discussed: the Hamiltonian approach, the Green's function approach with particular emphasis to bound state problems, and the newer, nonperturbative approach. The latest numerical results on radiative corrections, Lamb shifts and anomalous magnetic moments are reviewed with new results for high Z atoms. Also discussed are different theoretical interpretations of the radiative phenomena as due to quantized field vacuum fluctuations or due to self energy. A small group of contributions are devoted to the physics and mathematical description of decaying or unstable states in quantum theory. This remarkable phenomenon of quantum theory still needs complete clarification, it is a time-dependent phenomenon, which can be described also by asymptotic S-matrix methods, but with complex energies.