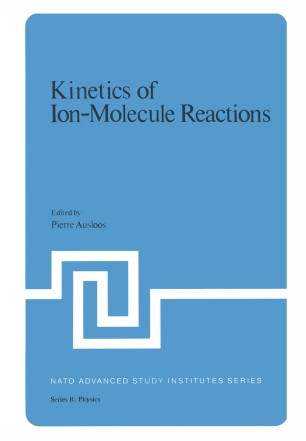 The investigation of the elementary reactions of reactive intermediate species began about half a centruy ago with the advent of free radical kinetics as an active area of chemical research. In spite of the relatively greater ease of detection of a species carrying an electrical charge, and the fact that organic chemists had for decades postulated mechanisms involving ionic intermediates, the systematic study of the elementary reactions of ions was delayed for more than twenty years after the first beginnings of free radical kinetics. Even at this writing, in 1978, the word "kinetics" is considered by many chemists to be synomomous with "kinetics of neutral species". Yet in spite of the relatively late start and separation from the mainstream of kinetics, the field of ion physics and chemistry is fluorishing, and growing at an ever faster pace. Instrumentalists devise ever more sophisticated apparatuses with capabilities of delving into nearly every aspect of the interactions between ions and molecules. Even satellites orbiting the earth are now being used effectively to determine rate coefficients of ionospheric ion-neutral reactions, some of which can not as yet be measured in the laboratory.