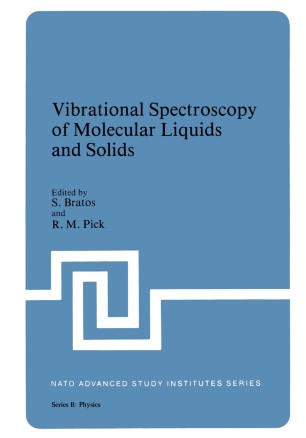 This book has its or1g1n in a NATO Summer School organized from June 25 to July 7 1979, in Menton, France. The purpose of this School was a comparative study of the various aspects of vibra­ tional spectroscopy in molecular liquids and solids. This field has been rapidly expanding in the last decade; unfortunately, its development took place independently for liquids and for solids. In these circumstances, the comparison of the basic concepts and techniques used in these two branches of physics appeared as a necessity. The lectures given at the Menton Advanced Study Institute, as well as the exceptionally fruitful and lively discussions which followed them confirmed this point of view. The need of putting together these lectures, in the form of a monograph, clearly appeared during the ASI and the lecturers accepted to write down the material they presented at the Institute, improved thanks to the remarks of the participants. It is the result of this collective work which appears in the familiar Plenum Series.