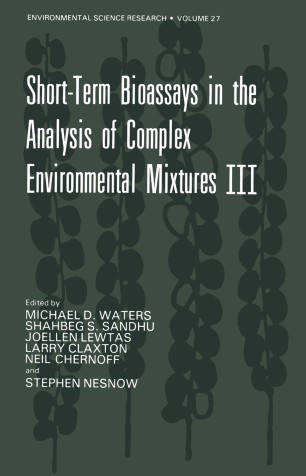 Short-Term Bioassays in the Analysis of Complex Environmental Mixtures III

In the four years since the 1978 Symposium on the Application of Short-Term Bioassays in the Fractionation and Analysis of Complex Environmental Mixtures the use of short-term bioassays to evaluate potential health hazards of complex environmental mixtures has substantially increased. Increased research activity has been particularly noticeable in mobile source emissions, where initial observations on the mutagenic activity of diesel particulate extracts reported at the 1978 symposium stimulated the development of major research programs in government and industry. In the absence of appropriate reference materials, the U.S. Environmental Protection Agency initiated comparative genotoxicity studies to determine the relative mutagenic and carcinogenic activity and, ultimately, the potential human health risk due to exposure to various complex emission products. Among the materials investigated were those of known health risk, such as coke oven and roofing tar emissions and cigarette smoke condensates, and those of unknown hazard, such as exhaust from diesel-and gasoline-powered vehicles. Studies on diesel emission products proved useful in short­ term bioassay development, as the diesel exhaust extracts were genetically active with low cellular toxicity and could be obtained in relatively large quantities. Availability of such samples aided chemical characterization, and it was eventually determined that the nitro-polynuclear aromatic hydrocarbons were among the mutagenic components of diesel exhaust particulate.