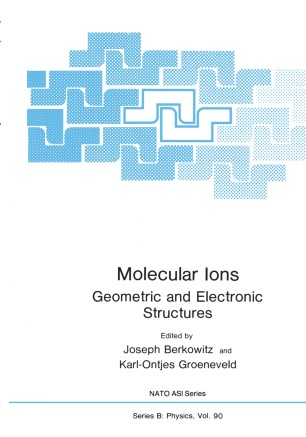 The present volume contains contributions presented at the NATO Advanced Study Institute on Molecular Ions held on the island of Kos, Greece, from September 30 to October 10, 1980. The meeting was attended by some 60 participants from 15 different countries. It was the first meeting devoted exclusively to the topic of molecular ions. Its vitality derived from bringing together experts and students from a wide variety of disciplines, whose studies bear upon the structure of molecular ions. The aim of the meeting was to assemble these scientists, representing many countries in Europe and North America, to discuss the advances and capabilities of the various experimental and theoretical approaches and to point out un­ solved problems and directions for future research. The format, in­ volving lecturers and students, served as a tutorial. Molecular ions play an important role in very diverse fields of nature such as reactions in the ionosphere, the processes of forma­ tion of molecules in dense interstellar clouds, and the magnetohydro­ dynamics of plasmas used for energy generation. Our understanding of the properties of molecular ions, their electronic and geometric structures, has been developing from a variety of sources, as far removed as tickling ions with radiofre­ quency radiation and smashing them apart at relativistic energies. Various laser techniques are described, and the queen of structural determination, spectroscopy, is well represented. On the instrumen­ tal side, older techniques have been perfected and new methods have evolved.