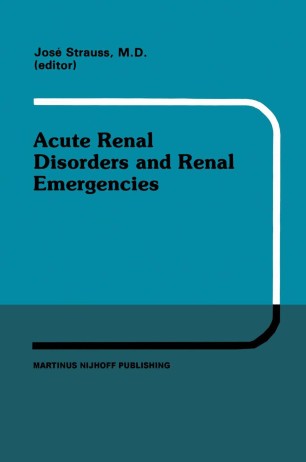 Part of the Developments in Nephrology book series (DINE, volume 7)

My thoughts about the Hemolytic Uremic Syndrome (HUS) got started in 1961 along with my attempt to return to Argentina. As I sought my way in Buenos Aires, I visited Carlos Gianantonio whom I had met in Caracas the year before during the Pan American pediatric meetings. At that time he was actively working on HUS which had become an epidemic in Buenos Aires and other parts of Argentina. I was impressed by the team effort and devotion of his group to such heavy demands. They obviously were meeting the challenge at an amazingly high level under a very crippling physical situation with shortages of space, laboratories and equipment. His group together with Dr. Becu, at the time the pathologist at the Children's Hospital of Buenos Aires (we had met through his mother who was instrumental in arranging my return to Buenos Aires), wrote some of the classic papers on HUS. Through the years as Dr. Gianantonio became more involved in general pediatrics, the administrative aspects and its orientation in Latin America, he became known for his deep philosophical questions as to what we are doing and where we are going. His questions have obvious implications regarding an agressive approach to our pediatric nephrology patients.