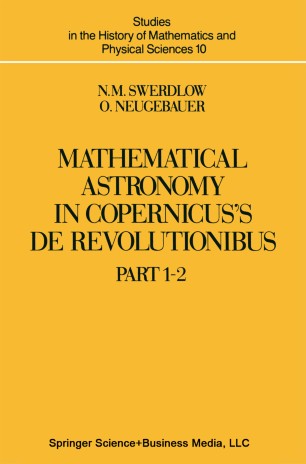 Part of the Studies in the History of Mathematics and Physical Sciences book series (HISTORY, volume 10)

When I first laid out the framework for A History of Ancient Mathe­ matical Astronomy, I intended to carry the discussion down to the last applications of Greek astronomical methodology, i. e. Copernicus, Brahe, and Kepler. But as the work proceeded, it became evident that this plan was much too ambitious, and so I decided to terminate my History with late antiquity, well before Islam. Nevertheless, I did not discard the running commentary that I had prepared when studying De revolutionibus in its relation to the methodology of the Almagest. Only recently, E. S. Kennedy and his collaborators had opened access to the" Maragha School" (mainly Ibn ash-Shalir), revealing close parallels to Copernicus's procedures. Accordingly, it seemed useful to make available a modern analysis of De revolutionibus, and thus in 1975 I prepared for publication "Notes on Copernicus. " In the meantime, however, Noel Swerdlow, also starting from Greek astronomy, not only extended his work into a deep analysis of De revolu­ tionibus, but also systematically investigated its sources and predecessors (Peurbach, Regiomontanus, etc. ). I was aware of these studies through his publications as well as from numerous conversations on the subject at The Institute for Advanced Study and at Brown University. It became clear to me that my own investigations lay at too superficial a level, and I therefore withdrew my manuscript and suggested to Swerdlow that he undertake a thoroughgoing revision and amplification of my "Notes. " His acceptance of my proposal initiated the present publication.