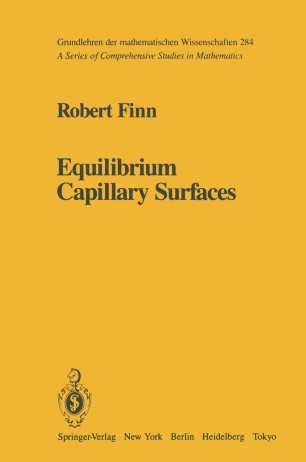 Capillarity phenomena are all about us; anyone who has seen a drop of dew on a plant leaf or the spray from a waterfall has observed them. Apart from their frequently remarked poetic qualities, phenomena of this sort are so familiar as to escape special notice. In this sense the rise of liquid in a narrow tube is a more dramatic event that demands and at first defied explanation; recorded observations of this and similar occur­ rences can be traced back to times of antiquity, and for lack of expla­ nation came to be described by words deriving from the Latin word "capillus", meaning hair. It was not until the eighteenth century that an awareness developed that these and many other phenomena are all manifestations of some­ thing that happens whenever two different materials are situated adjacent to each other and do not mix. If one (at least) of the materials is a fluid, which forms with another fluid (or gas) a free surface interface, then the interface will be referred to as a capillary surface.