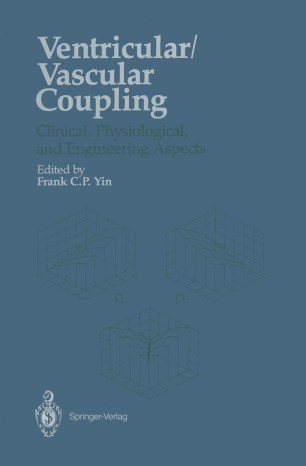 Physiologists have long been interested in the interaction, or coupling, between the heart and the vasculature. The early literature consists mainly of phenomenological descriptions of cardiac alterations resulting from specific interventions in the vasculature. Hundreds of studies, for example, describe functional aspects of hypertrophied myocardium associated with the excessive vascular loading produced by various types of experimental hypertension. Recently, the concepts of ventricular/vascular interaction have found important clinical application. The widespread use of vaso­ dilators and of intraaortic counterpUlsation balloons for unloading an ov­ erburdened, diseased heart is a prime example. Despite the interest in this field, until as recently as 20 years ago we were not able to describe ventricular or vascular function in a framework suitable for quantitatively expressing the interaction between these two complex systems. Three major developments-description of ventricular function in terms of both the time-varying elastance and the pump function graph and quantification of vascular function in terms of impedance­ have changed this. These functional descriptions now enable systems en­ gineers, bioengineers, physiologists, and clinicians to address very specific quantitative aspects of ventricular/vascular interaction and have resulted in a flurry of papers and symposia devoted to this subject.