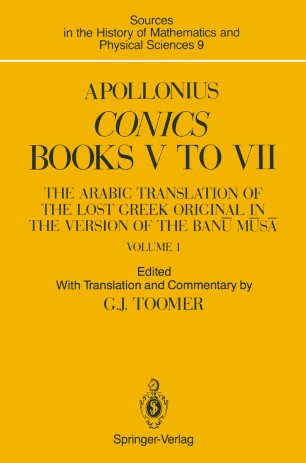 Part of the Sources in the History of Mathematics and Physical Sciences book series (SOURCES, volume 9)

With the publication of this book I discharge a debt which our era has long owed to the memory of a great mathematician of antiquity: to pub­ lish the /llost books" of the Conics of Apollonius in the form which is the closest we have to the original, the Arabic version of the Banu Musil. Un­ til now this has been accessible only in Halley's Latin translation of 1710 (and translations into other languages entirely dependent on that). While I yield to none in my admiration for Halley's edition of the Conics, it is far from satisfying the requirements of modern scholarship. In particular, it does not contain the Arabic text. I hope that the present edition will not only remedy those deficiencies, but will also serve as a foundation for the study of the influence of the Conics in the medieval Islamic world. I acknowledge with gratitude the help of a number of institutions and people. The John Simon Guggenheim Memorial Foundation, by the award of one of its Fellowships for 1985-86, enabled me to devote an unbroken year to this project, and to consult essential material in the Bodleian Li­ brary, Oxford, and the Bibliotheque Nationale, Paris. Corpus Christi Col­ lege, Cambridge, appointed me to a Visiting Fellowship in Trinity Term, 1988, which allowed me to make good use of the rich resources of both the University Library, Cambridge, and the Bodleian Library.