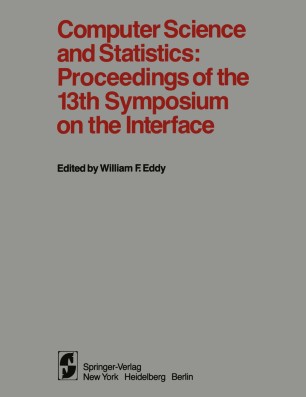 Computer Science and Statistics: Proceedings of the 13th Symposium on the Interface

The 13th Symposium on the Interface continued this series after a one year pause. The objective of these symposia is to provide a forum for the interchange of ideas of common concern to computer scientists and statisticians. The sessions of the 13th Symposium were held in the Pittsburgh Hilton Hotel, Gateway Center, Pittsburgh. Following established custom the 13th Symposium had organized workshops on various topics of interest to participants. The workshop format allowed the invited speakers to present their material variously as formal talks, tutorial sessions and open discussion. The Symposium schedule was also the customary one. Registration opened in late afternoon of March 11, 1981 and continued during the opening mixer held that evening: The formal opening of the Symposium was on the morning of March 12. The opening remarks were followed by Bradley Efron's address "Statistical Theory and the Computer." The rest of the daily schedule was three concurrent workshops in the morning and three in the afternoon with contributed poster sessions during the noon break. Additionally there were several commercial displays and guided tours of Carnegie-Mellon University's Computer Center, Computer Science research facilities, and Robotics Institute.