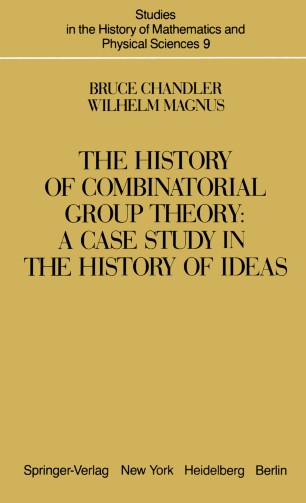 The History of Combinatorial Group Theory

A Case Study in the History of Ideas

Part of the Studies in the History of Mathematics and Physical Sciences book series (HISTORY, volume 9)

One of the pervasive phenomena in the history of science is the development of independent disciplines from the solution or attempted solutions of problems in other areas of science. In the Twentieth Century, the creation of specialties witqin the sciences has accelerated to the point where a large number of scientists in any major branch of science cannot understand the work of a colleague in another subdiscipline of his own science. Despite this fragmentation, the development of techniques or solutions of problems in one area very often contribute fundamentally to solutions of problems in a seemingly unrelated field. Therefore, an examination of this phenomenon of the formation of independent disciplines within the sciences would contrib­ ute to the understanding of their evolution in modern times. We believe that in this context the history of combinatorial group theory in the late Nineteenth Century and the Twentieth Century can be used effectively as a case study. It is a reasonably well-defined independent specialty, and yet it is closely related to other mathematical disciplines. The fact that combinatorial group theory has, so far, not been influenced by the practical needs of science and technology makes it possible for us to use combinatorial group theory to exhibit the role of the intellectual aspects of the development of mathematics in a clearcut manner. There are other features of combinatorial group theory which appear to make it a reasona­ ble choice as the object of a historical study.