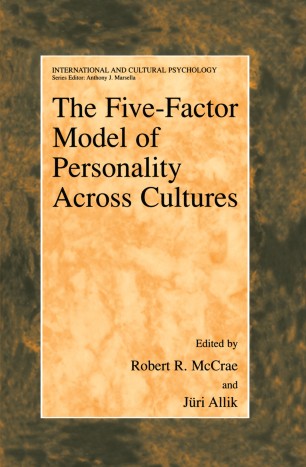 The Five-Factor Model of Personality Across Cultures

ROBERT R. MCCRAE* & JuRI ALLIK** *Nationallnstitute on Aging, **University of Tartu, Estonia Personality psychology has become an international enterprise. To take an example at random, the eight personality articles in the December, 2001, issue of the Journal of Personality and Social Psychology included contributions from the United States, Canada, Germany, Finland, and Israel. For the most part, international personality research is not cross-cultural; it is simply personality research conducted in different countries. The implicit assumption behind this practice is that personality processes are universal, and where they are studied is thus of no consequence. An insensitivity to cul­ tural context once imputed mostly to Americans now appears to characterize the field worldwide. Fortunately, recent years have also seen a rise of interest in studies of personality and culture (Church, 2001; Church & Lonner, 1998; Lee, McCauley, & Draguns, 1999; McCrae, 2000). What do these new studies show? Are personality processes indeed universal, or are there significant variations across cultures that necessitate a more nuanced approach to research? There is as yet no definitive answer to that question. In some respects, human personality does seem to transcend the boundaries of language and culture; in other respects, it is profoundly influenced by social and historical forces. Sorting these issues out must be a priority for our field if we are to understand the current personality literature.