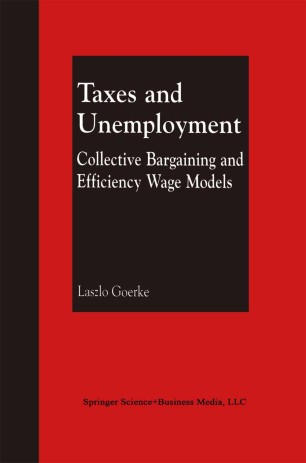 This chapter has set out in detail the models which are employed below in order to analyse the labour market effects of changes in tax rates and in alterations in the tax structure. The fundamental mechanisms underlying the different approaches have been pointed out. Moreover, vital assumptions have been emphasised. By delineating the models which are used for the subsequent analyses, implicitly statements have also been made about topics or aspects which this study does not cover. For example, all workers and firms are identical ex­ ante. However, ex-post differences are allowed for, inter alia, if unemploy­ ment occurs or if some firms have to close down. These restrictions indicate areas of future research insofar as that the findings for homogeneous workers or firms yield an unambiguous proposal for changes in tax rates or the tax structure in order to promote employment. This is because it would be desir­ able for tax policy to know whether the predicted effects also hold in a world with ex-ante heterogeneity. Furthermore, the product market has not played a role. Therefore, repercussions from labour markets outcomes on product demand - and vice versa - are absent. 55 Moreover, neither the process of capital accumulation, be it physical or human capital, nor substitution pos­ sibilities between labour and capital in the firms' production function are taken into account. Finally, international competition is not modelled.