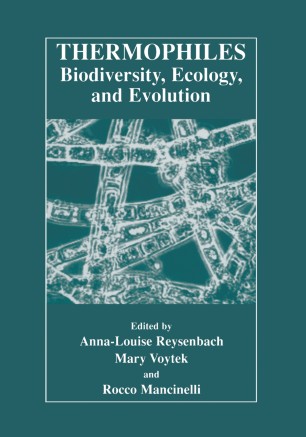 These are indeed exciting times to be a microbiologist. With one of the buzzwords of the past decade-"Biodiversity," and microbes are reveling in the attention as they represent by far most of the biodiversity on Earth. Microbes can thrive in almost any environment where there is an exploitable energy source, and, as a result, the possible existence of microbial life elsewhere in the solar system has stimulated the imaginations of many. Extremophiles have taken center stage in these investigations, and thermophiles have taken on the lead roles. Consequently, in the past decade there has been a surge of interest and research in the Ecology, Biology, and Biotechnology of microorganisms from thermal environments. Many of the foundations of thermophile research were laid in Yellowstone National Park, primarily by the research of Professor Thomas Brock's laboratory in the late 1960s and early 1970s. The upper temperature for life was debated, the first thermophilic archeum discovered (although it was only later shown to be an archeum by ribosomal cataloging), and the extremes of light, temperature, pH on the physiology of microorga­ nisms were explored. Interest in thermophiles increased steadily in the 1970s, and with the discovery of deep-sea hydrothermal vents in 1977, thermophilic research began its expo­ nential explosion. The development of Taq polymerase in the polymerase chain reaction (peR) focused interest on the biotechnological potential of thermophilic microorganisms and on the thermal features in Yellowstone National Park.