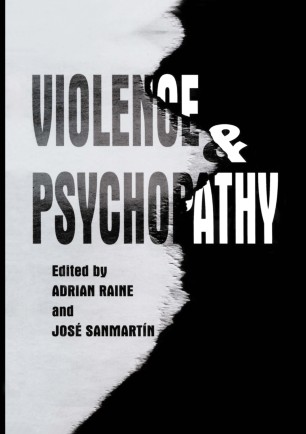 Adrian Raine Department of Psychology. University of Southern California. USA Jose Sanmartin Queen Sojia Center for the Study of Violence. Valencia. Spain The problems that psychopathic and violent offenders create for society are not restricted to North America. Instead, these offenders create havoc throughout the world, including Europe. In recognition of this fact, Queen Sophia of Spain has promoted a Center for the Study of Violence which recognizes both biological and social contributions to the cause of violence. In November 1999, the Queen Sofia Center for the Study of Violence held its IV International Meeting on the Biology and Sociology of Violence. This fourth Meeting, which was under the Honorary Presidency of H. M. The Queen of Spain, examined the biological, psychological and social aspects of the psychopath, the violent offender, and the serial killer. This book presents some of the key contributions made at that conference and which were first published in Spanish in 2000 by Ariel Press. A key thrust of this book, and a stance shared by all of its contributors, is the notion that violence and psychopathy simply cannot be understood solely, or even fundamentally, in terms of social and environmental forces and influences. Nor do biological factors offer an exclusive explanation.