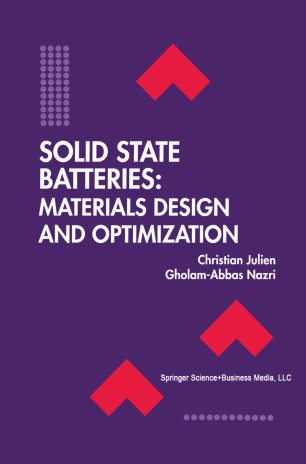 Part of the The Kluwer International Series in Engineering and Computer Science book series (SECS, volume 271)

The field of solid state ionics is multidisciplinary in nature. Chemists, physicists, electrochimists, and engineers all are involved in the research and development of materials, techniques, and theoretical approaches. This science is one of the great triumphs of the second part of the 20th century. For nearly a century, development of materials for solid-state ionic technology has been restricted. During the last two decades there have been remarkable advances: more materials were discovered, modem technologies were used for characterization and optimization of ionic conduction in solids, trial and error approaches were deserted for defined predictions. During the same period fundamental theories for ion conduction in solids appeared. The large explosion of solid-state ionic material science may be considered to be due to two other influences. The first aspect is related to economy and connected with energy production, storage, and utilization. There are basic problems in industrialized countries from the economical, environmental, political, and technological points of view. The possibility of storing a large amount of utilizable energy in a comparatively small volume would make a number of non-conventional intermittent energy sources of practical convenience and cost. The second aspect is related to huge increase in international relationships between researchers and exchanges of results make considerable progress between scientists; one find many institutes joined in common search programs such as the material science networks organized by EEC in the European countries.