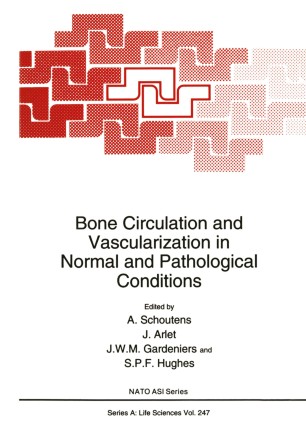 Bone Circulation and Vascularization in Normal and Pathological Conditions

The Association Internationale de Recherche sur la Circulation Osseuse, A.R.C.O., was founded in London in December 1989 by a small group of doctors, surgeons and researchers in basic sciences who had been involved for many years in the study of bone circulation and its disorders. They had met several times in Toulouse, during the International Symposia on Bone Circulation held there since 1973 and they wished to carry their contacts further. In founding A.R.C.O., they established as their primary aims the encouragement and furtherance of research, organisation of meetings and promotion of knowledge on the subject. At the present time, the Association has over a hundred members from more than bone tissue twenty countries in Europe, America and Asia. All have the conviction that and its pathology can only be truly known and studied if one has an understanding of its vascular system and the way its circulation functions. This concept, apparently beyond question, has not yet been adopted by all physicians and scientists who are interested in bone. From time to time, one comes across teaching programmes on bone patho­ logy which make no mention of bone circulation.