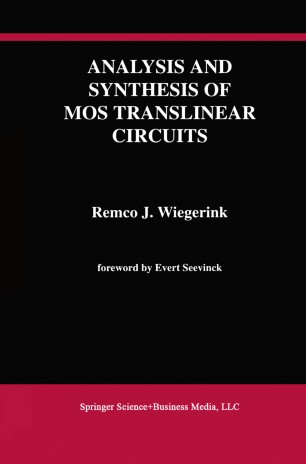 Part of the The Springer International Series in Engineering and Computer Science book series (SECS, volume 246)

This book has its roots in an idea first formulated by Barrie Gilbert in 1975. He showed how bipolar analog circuits can realize nonlinear and computational functions. This extended the analog art from linear to nonlinear applications, hence the name trans linear circuits. Not only did this new principle enable marvellous signal processing functions to be accurately implemented, but also the circuits were simple and practical. The perennial problems of analog Ie design, namely temperature sensitivity, processing spread, device nonlinearity and paracitic capacitance were solved to a large extent. Using the trans linear principle in circuit design requires changing your point of view in two ways. First, the grossly nonlinear characteristic of transistors is viewed as an asset rather than as a harmful property. Second, no longer are the signals represented by voltages, but by currents. In fact, the attendant voltage changes are distorted but, as they are very small, they are only of secondary interest. Understanding and analyzing a given trans linear circuit is fairly straightforward. But what about the converse situation: suppose you're given some nonlinear or computational function to implement? How to find a suitable translinear circuit realization? The general problem of analog circuit synthesis is a difficult one and is receiving much attention nowadays. Some years ago, I had the opportunity to investigate methods for designing bipolar trans linear circuits. It turned out that translinear networks have some unique topological properties. Using these properties it was possible to establish heuristic synthesis procedures.