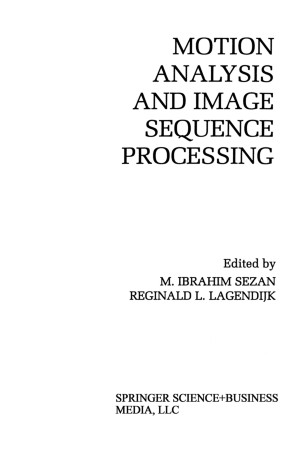 Part of the The Springer International Series in Engineering and Computer Science book series (SECS, volume 220)

An image or video sequence is a series of two-dimensional (2-D) images sequen­ tially ordered in time. Image sequences can be acquired, for instance, by video, motion picture, X-ray, or acoustic cameras, or they can be synthetically gen­ erated by sequentially ordering 2-D still images as in computer graphics and animation. The use of image sequences in areas such as entertainment, visual communications, multimedia, education, medicine, surveillance, remote control, and scientific research is constantly growing as the use of television and video systems are becoming more and more common. The boosted interest in digital video for both consumer and professional products, along with the availability of fast processors and memory at reasonable costs, has been a major driving force behind this growth. Before we elaborate on the two major terms that appear in the title of this book, namely motion analysis and image sequence processing, we like to place them in their proper contexts within the range of possible operations that involve image sequences. In this book, we choose to classify these operations into three major categories, namely (i) image sequence processing, (ii) image sequence analysis, and (iii) visualization. The interrelationship among these three categories is pictorially described in Figure 1 below in the form of an "image sequence triangle".