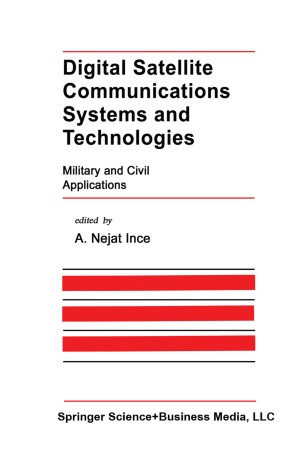 Part of the The Springer International Series in Engineering and Computer Science book series (SECS, volume 186)

Among the space activities of the last three decades satellite communications (SATCOM) has found the widest application in meeting both civil and military communications requirements. Several international, regional and national SATCOM systems of increasing capacity, capability and complexity have been and are being implemented over the years. The latest versions are utilizing such concepts as spot beams, processing transponders in SS-TDMA and operations in different frequency bands including the EHF band. On the military side, the United States of America, the United Kingdom, France and NATO (the North Atlantic Treaty Organisation) have been the only owners and operators of military SATCOM systems in the West. The systems in being and under development use satellites and ground terminals with characteristics which differ from the civilian ones with respect to frequency bands utilised and survivability and interoperability. The SATCOM has given the military users the potential of having much-needed mobility, flexibility and survivability in strategic and tactical communications for land, sea and air operations. It must, however, be said particularly for the military SATCOM systems that they have been evolved in big jumps, both in time and capability, each jump involving the deployment of two or three often specially designed large satellites, large expenses and rather traumatic transition between jumps. Despite these undesirable features these systems did not have the required degree of suevivability and flexibility.