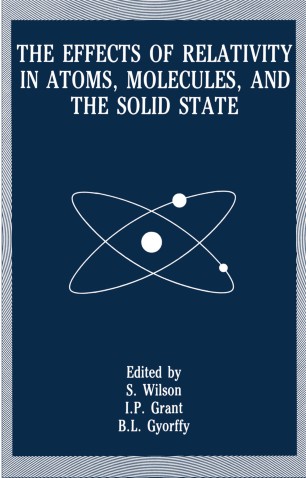 The Effects of Relativity in Atoms, Molecules, and the Solid State

Recent years have seen a growing interest in the effects of relativity in atoms, molecules and solids. On the one hand, this can be seen as result of the growing awareness of the importance of relativity in describing the properties of heavy atoms and systems containing them. This has been fueled by the inadequacy of physical models which either neglect relativity or which treat it as a small perturbation. On the other hand, it is dependent upon the technological developments which have resulted in computers powerful enough to make calculations on heavy atoms and on systems containing heavy atoms meaningful. Vector processing and, more recently, parallel processing techniques are playing an increasingly vital role in rendering the algorithms which arise in relativistic studies tractable. This has been exemplified in atomic structure theory, where the dominant role of the central nuclear charge simplifies the problem enough to permit some prediction to be made with high precision, especially for the highly ionized atoms of importance in plasma physics and in laser confinement studies. Today's sophisticated physical models of the atom derived from quantum electrodynamics would be intractable without recourse to modern computational machinery. Relativistic atomic structure calculations have a history dating from the early attempts of Swirles in the mid 1930's but continue to provide one of the primary test beds of modern theoretical physics.