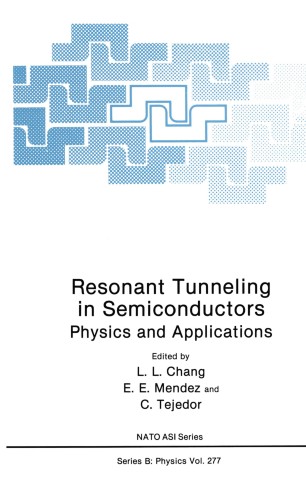 This book contains the proceedings of the NATO Advanced Research Workshop on "Resonant Tunneling in Semiconductors: Physics and Applications", held at Escorial, Spain, on May 14-18, 1990. The tremendous growth in the past two decades in the field of resonant tunneling in semiconductor heterostructures has followed, if not outpaced, the expansion wit­ nessed in quantum structures in general. Resonant tunneling shares also the multi­ disciplinary nature of that broad area, with an emphasis on the underlying physics but with a coverage of material systems on the one end and device applications on the other. Indeed, that resonant tunneling provides great flexibility in terms of materials and configurations and that it is inherently a fast process with obvious device impli­ cations by the presence of a negative differential resistance have contributed to the unrelenting interest in this field. These proceedings consist of 49 refereed articles; they correspond to both invited and contributed talks at the workshop. Because of the intertwinning nature of the subject matter, it has been difficult to subdivide them in well-defined sections. Instead, they are arranged in several broad categories, meant to serve only as guidelines of emphasis on different topics and aspects. The book starts with an introduction to res­ onant tunneling by providing a perspective of the field in the first article. This is fol­ lowed by discussions of different material systems with various band-structure effects.