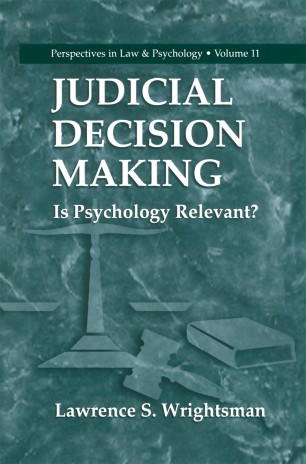 In the mid-1970s, as a social psychologist dedicated to the application of knowl­ edge, I welcomed our field's emerging interest in the legal system. I have al­ ways been fascinated by jury trials-something about the idea that two con­ ceptions of the truth were in irrevocable conflict and jurors could choose only one of them. More important, the criminal justice system is a major social force that has been ignored by social psychologists for most of the twentieth century. As I systematically began to explore the applications of social psycho­ logical concepts to the law 20 years ago, I experienced the delight of discovery similar to that of a child under a Christmas tree. It has been satisfying to be among the cohort of researchers who have studied the legal system, especially trial juries, from a psychological perspective. I believe we have learned much that would be useful if the system were to be revised. Hlf the system were to be revised" . . . there's the rub. As I have stated, my original motivation was the application of knowledge. Like other social scien­ tists, I believed-perhaps arrogantly-that the results of our research efforts could be used to make trial juries operate with more efficiency, accuracy, and satisfaction. Qver the last two decades, much knowledge has accumulated. How can we put this knowledge to work? Judges are the gatekeepers of the legal system.