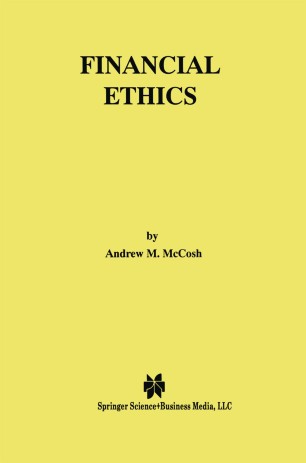 Financial Ethics presents an exploration of this relatively new subject. The book will follow two different trails, which eventually are brought together. The first trail is an exploration in Chapters One and Two of the general nature of the finance industry, of the institutions which make it up, of the people in it and the pressures they are under. The first trail also examines the nature of the reward system in the finance industry.
The second trail is an examination of the guidance people can obtain from four of the world's great religions on exactly how people ought to behave when engaged in the financial industry.
The second part of the book is contained in Chapters Three to Nine. If people propose to advise the financiers to be ethical, it is important to know what is meant by this, and to call upon reliable sources and why they are using the four particular religious sources chosen. The next four chapters extract business and financial commands and one or two important interpretive writings from Judaism, Christianity, Islam and Buddhism.
Part Three of the book (Chapters Ten to Thirteen) is a distillation of the concepts from the religions, an application of the concepts to the modern financial world, and a discussion of the various organizational tools which might be used to put them into operation.