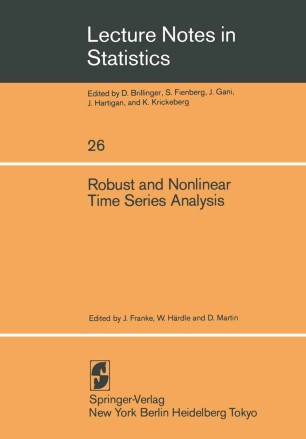 Proceedings of a Workshop Organized by the Sonderforschungsbereich 123 “Stochastische Mathematische Modelle”, Heidelberg 1983

Classical time series methods are based on the assumption that a particular stochastic process model generates the observed data. The, most commonly used assumption is that the data is a realization of a stationary Gaussian process. However, since the Gaussian assumption is a fairly stringent one, this assumption is frequently replaced by the weaker assumption that the process is wide~sense stationary and that only the mean and covariance sequence is specified. This approach of specifying the probabilistic behavior only up to "second order" has of course been extremely popular from a theoretical point of view be­ cause it has allowed one to treat a large variety of problems, such as prediction, filtering and smoothing, using the geometry of Hilbert spaces. While the literature abounds with a variety of optimal estimation results based on either the Gaussian assumption or the specification of second-order properties, time series workers have not always believed in the literal truth of either the Gaussian or second-order specifica­ tion. They have none-the-less stressed the importance of such optimali­ ty results, probably for two main reasons: First, the results come from a rich and very workable theory. Second, the researchers often relied on a vague belief in a kind of continuity principle according to which the results of time series inference would change only a small amount if the actual model deviated only a small amount from the assum­ ed model.