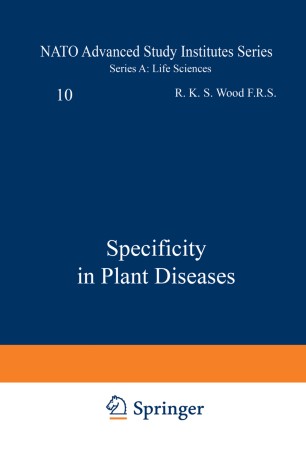 A NATO Advanced Study Institute on "Phytotoxins in Plant Diseases" was held in Pugnochiuso (Italy) in June 1970. It was concerned mainly with the chemistry and mode of action of substances toxic to higher plants which are produced by pathogenic bacteria and fungi. The role of such substances in specificity was consider­ ed but largely in relation to host-specific toxins. In 1973, in light of the success of the 1970 Institute, we decided to plan for another in 1975 and after discussion with col­ leagues during the Second International Congress of Plant Pathology, we selected "Specificity in Plant Diseases" as the theme for the 1975 Institute. Our chief reasons for the choice were that specificity is un­ doubtedly the dominant problem in plant pathology and that with the rapid increase during the last decade or so in the diversity and sophistication of biochemical techniques, we should now expect during the next few years much more research on specificity and major ad­ vances in our understanding of the mechanisms that control it. It seemed to us that a residential meeting with the advantages and status of a NATO Advanced Study Institute would do much to stimulate interest and research in this most important field. The theme also had the merit of continuity with that of the 1970 Institute.