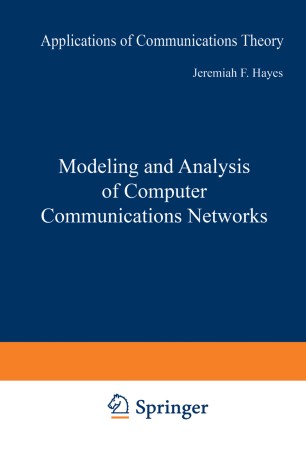 Part of the Applications of Communications Theory book series (ACTH)

In large measure the traditional concern of communications engineers has been the conveyance of voice signals. The most prominent example is the telephone network, in which the techniques used for transmission multiplex­ ing and switching have been designed for voice signals. However, one of the many effects of computers has been the growing volume of the sort of traffic that flows in networks composed of user terminals, processors, and peripherals. The characteristics of this data traffic and the associated perfor­ mance requirements are quite different from those of voice traffic. These differences, coupled with burgeoning digital technology, have engendered a whole new set of approaches to multiplexing and switching this traffic. The new techniques are the province of what has been loosely called computer communications networks. The subject of this book is the mathematical modeling and analysis of computer communications networks, that is to say, the multiplexing and switching techniques that have been developed for data traffic. The basis for many of the models that we shall consider is queueing theory, although a number of other disciplines are drawn on as well. The level at which this material is covered is that of a first-year graduate course. It is assumed that at the outset the student has had a good undergraduate course in probability and random processes of the sort that are more and more common among electrical engineering and computer science departments.