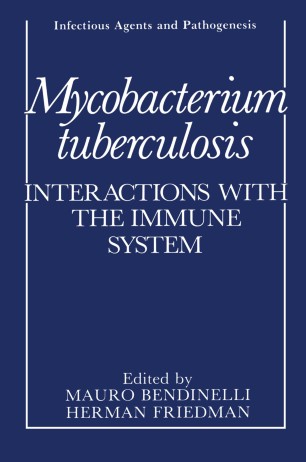 Interactions with the Immune System

Part of the Infectious Agents and Pathogenesis book series (IAPA)

Tuberculosis once again occupies a special position in the areas of infec­ tious diseases and microbiology. This disease has been important to mankind since even before biblical times. Tuberculosis has been a major cause of morbidity and mortality in humans, especially in highly ur­ banized Europe, until a few decades ago. Indeed, this disease became a center of many novels, plays, and operas, since it appeared to be quite popular to have the heroine dying of "consumption. " Most importantly, tuberculosis also became the focus of attention for many investigations during the 19th and even the 20th centuries. Major advances were made in the areas of isolation and identification of M. tuberculosis and related microorganisms. The discovery, by Robert Koch, that tuberculosis was caused by an infectious agent revolutionized our thinking about dis­ eases. Koch's postulates were developed with tuberculosis in mind and became a focal point for many advances in microbiology and medicine. Studies with mycobacteria as a central focus have also led to revolu­ tionary new concepts about immunology in general. Koch himself showed that those exposed to M. tuberculosis develop a skin hypersen­ sitivity or allergy to the microorganism's antigens, an observation which was the starting point for many important developments. Indeed, imme­ diate-type hypersensitivity and atopic or IgE-mediated allergy were de­ fined in relation to the delayed-type cutaneous hypersensitivity evi­ denced with the tubercle bacillus.