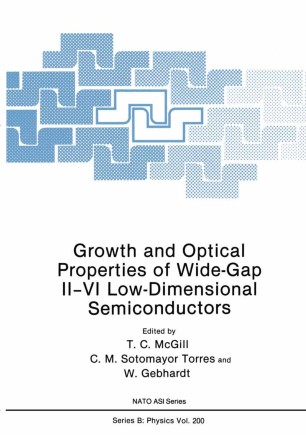 This volume contains the Proceedings of the NATO Advanced Research Workshop on "Growth and Optical Properties of Wide Gap II-VI Low Dimensional Semiconductors", held from 2 - 6 August 1988 in Regensburg, Federal Republic of Germany, under the auspices of the NATO International Scientific Exchange Programme. Semiconducting compounds formed by combining an element from column II of the periodic table with an element from column VI (so called II-VI Semiconductors) have long promised many optoelectronic devices operating in the visible region of the spectrum. However, these materials have encountered numerous problems including: large number of defects and difficulties in obtaining p- and n-type doping. Advances in new methods of material preparation may hold the key to unlocking the unfulfilled promises. During the workshop a full session was taken up covering the prospects for wide-gap II-VI Semiconductor devices, particularly light emitting ones. The growth of bulk materials was reviewed with the view of considering II-VI substrates for the novel epitaxial techniques such as MOCVD, MBE, ALE, MOMBE and ALE-MBE. The controlled introduction of impurities during non-equilibrium growth to provide control of the doping type and conductivity was emphasized.