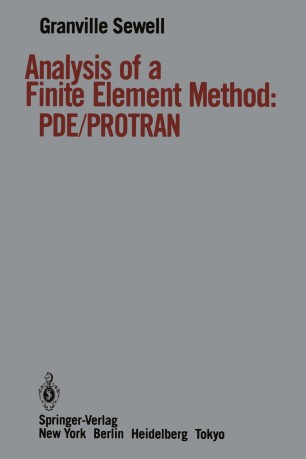 Analysis of a Finite Element Method

This text can be used for two quite different purposes. It can be used as a reference book for the PDElPROTRAN user· who wishes to know more about the methods employed by PDE/PROTRAN Edition 1 (or its predecessor, TWODEPEP) in solving two-dimensional partial differential equations. However, because PDE/PROTRAN solves such a wide class of problems, an outline of the algorithms contained in PDElPROTRAN is also quite suitable as a text for an introductory graduate level finite element course. Algorithms which solve elliptic, parabolic, hyperbolic, and eigenvalue partial differential equation problems are pre­ sented, as are techniques appropriate for treatment of singularities, curved boundaries, nonsymmetric and nonlinear problems, and systems of PDEs. Direct and iterative linear equation solvers are studied. Although the text emphasizes those algorithms which are actually implemented in PDEI PROTRAN, and does not discuss in detail one- and three-dimensional problems, or collocation and least squares finite element methods, for example, many of the most commonly used techniques are studied in detail. Algorithms applicable to general problems are naturally emphasized, and not special purpose algorithms which may be more efficient for specialized problems, such as Laplace's equation. It can be argued, however, that the student will better understand the finite element method after seeing the details of one successful implementation than after seeing a broad overview of the many types of elements, linear equation solvers, and other options in existence.