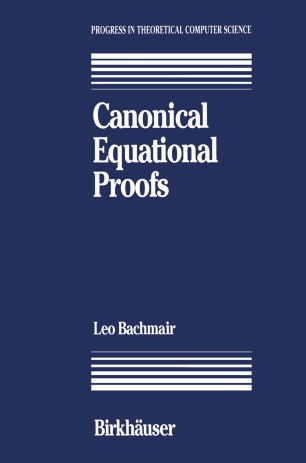 Equations occur in many computer applications, such as symbolic compu­ tation, functional programming, abstract data type specifications, program verification, program synthesis, and automated theorem proving. Rewrite systems are directed equations used to compute by replacing subterms in a given formula by equal terms until a simplest form possible, called a normal form, is obtained. The theory of rewriting is concerned with the compu­ tation of normal forms. We shall study the use of rewrite techniques for reasoning about equations. Reasoning about equations may, for instance, involve deciding whether an equation is a logical consequence of a given set of equational axioms. Convergent rewrite systems are those for which the rewriting process de­ fines unique normal forms. They can be thought of as non-deterministic functional programs and provide reasonably efficient decision procedures for the underlying equational theories. The Knuth-Bendix completion method provides a means of testing for convergence and can often be used to con­ struct convergent rewrite systems from non-convergent ones. We develop a proof-theoretic framework for studying completion and related rewrite­ based proof procedures. We shall view theorem provers as proof transformation procedures, so as to express their essential properties as proof normalization theorems.