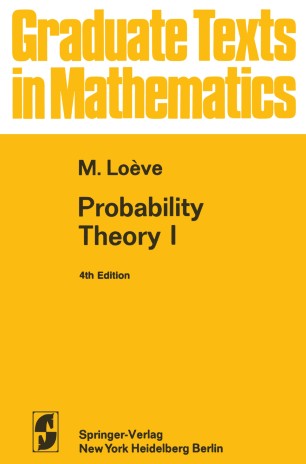 This fourth edition contains several additions. The main ones con­ cern three closely related topics: Brownian motion, functional limit distributions, and random walks. Besides the power and ingenuity of their methods and the depth and beauty of their results, their importance is fast growing in Analysis as well as in theoretical and applied Proba­ bility. These additions increased the book to an unwieldy size and it had to be split into two volumes. About half of the first volume is devoted to an elementary introduc­ tion, then to mathematical foundations and basic probability concepts and tools. The second half is devoted to a detailed study of Independ­ ence which played and continues to playa central role both by itself and as a catalyst. The main additions consist of a section on convergence of probabilities on metric spaces and a chapter whose first section on domains of attrac­ tion completes the study of the Central limit problem, while the second one is devoted to random walks. About a third of the second volume is devoted to conditioning and properties of sequences of various types of dependence. The other two thirds are devoted to random functions; the last Part on Elements of random analysis is more sophisticated. The main addition consists of a chapter on Brownian motion and limit distributions.