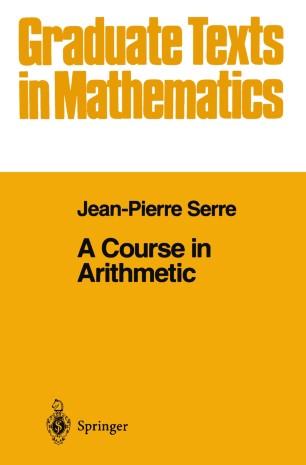 A Course in Arithmetic

This book is divided into two parts. The first one is purely algebraic. Its objective is the classification of quadratic forms over the field of rational numbers (Hasse-Minkowski theorem). It is achieved in Chapter IV. The first three chapters contain some preliminaries: quadratic reciprocity law, p-adic fields, Hilbert symbols. Chapter V applies the preceding results to integral quadratic forms of discriminant ± I. These forms occur in various questions: modular functions, differential topology, finite groups. The second part (Chapters VI and VII) uses "analytic" methods (holomor­ phic functions). Chapter VI gives the proof of the "theorem on arithmetic progressions" due to Dirichlet; this theorem is used at a critical point in the first part (Chapter Ill, no. 2.2). Chapter VII deals with modular forms, and in particular, with theta functions. Some of the quadratic forms of Chapter V reappear here. The two parts correspond to lectures given in 1962 and 1964 to second year students at the Ecole Normale Superieure. A redaction of these lectures in the form of duplicated notes, was made by J.-J. Sansuc (Chapters I-IV) and J.-P. Ramis and G. Ruget (Chapters VI-VII). They were very useful to me; I extend here my gratitude to their authors.