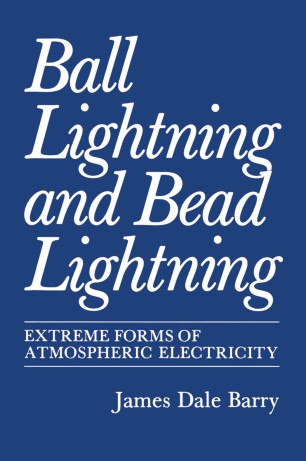 The purpose of this monograph is to review the known physical aspects of two unusual forms of atmospheric luminous phenomena, to deduce their characteristics and properties, and to promote efforts to improve their understanding. These two forms, called ball lightning and bead lightning, have visual images that differ from the linear image associated with normallightning. The terms "balliightning" and "bead lightning" are used to denote atmospheric luminous forms which are occasionally observed and have the geometrie shape suggested by their name. Vet, it is possible that neither phenomenon may in fact be a form of lightning in the sense of a continuous electrical discharge. Bead lightning has been described as the residue of a cloud-to­ cloud or cloud-to-ground lightning stroke and has the appearance of aseries of luminous balls separated by dark regions, thus resembling astring of pearls, and remains visible for about one second. Ball lightning has been described as a single luminous globe appearing ne ar the ground after a lightning stroke and also remaining visible for about one second. Both phenomena remain visible far longer than normal lightning flashes.