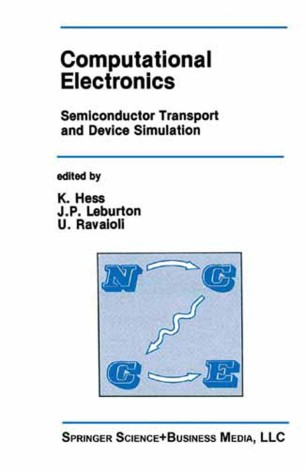 Part of the The Springer International Series in Engineering and Computer Science book series (SECS, volume 113)

Large computational resources are of ever increasing importance for the simulation of semiconductor processes, devices and integrated circuits. The Workshop on Computational Electronics was intended to be a forum for the dis­ cussion of the state-of-the-art of device simulation. Three major research areas were covered: conventional simulations, based on the drift-diffusion and the hydrodynamic models; Monte Carlo methods and other techniques for the solution of the Boltzmann transport equation; and computational approaches to quantum transport which are relevant to novel devices based on quantum interference and resonant tunneling phenomena. Our goal was to bring together researchers from various disciplines that contribute to the advancement of device simulation. These include Computer Sci­ ence, Electrical Engineering, Applied Physics and Applied Mathematics. The suc­ cess of this multidisciplinary formula was proven by numerous interactions which took place at the Workshop and during the following three-day Short Course on Computational Electronics. The format of the course, including a number of tutorial lectures, and the large attendance of graduate students, stimulated many discussions and has proven to us once more the importance of cross-fertilization between the different disciplines.