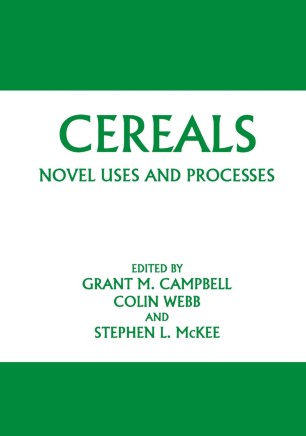 "So long as a person is capable of self renewal they are a living being. " -Amiel Cereals have been the source of life to the human race, providing nutritional and ma­ terial needs since the dawn of civilization. As with all dynamic industries, the Cereal in­ dustry has renewed itself in the past; as the millennium approaches, it is on the brink of another renewal, in which the versatility and providence of cereals are being rediscovered, but in new and exciting ways. Cereals are richly diverse; over 10,000 varieties convert minerals and the energy of the sun into a bursting catalog of functional and versatile biomolecules and biopolymers. Processing technology allows these components to be accessed, separated, isolated and purified, while chemical science allows modification for even greater diversity and speci­ ficity. The last century has seen the move from cereal- to oil-based chemical and materials industries. But cereals contain a greater variety and functionality of macromolecules than oil. Starch, protein, bran and straw, already diverse across cereal varieties, can be fraction­ ated into more specific elements, modified chemically to enhance function, or used as feedstocks in fermentation-based bioconversion systems, to produce a range of bulk and fine chemicals for industries as diverse as food, pharmaceuticals, plastics, textiles, pulp and paper, transport, composites and boards, adhesives and energy.