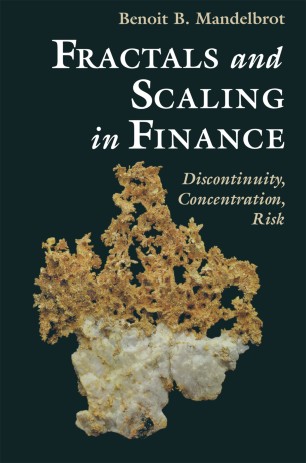 Fractals and Scaling in Finance

IN 1959-61, while the huge Saarinen-designed research laboratory at Yorktown Heights was being built, much of IBM's Research was housed nearby. My group occupied one of the many little houses on the Lamb Estate complex which had been a sanatorium housing wealthy alcoholics. The picture below was taken about 1960. It shows from right to left, T. e. Hu, now at the University of California, Santa Barbara. I am next, staring at a network I have just written on the blackboard. Then comes Paul Gilmore, late of the University of British Columbia, then (seated) Richard Levitan, now retired, and at the left is Benoit Mandelbrot. x FOREWORD EF Even in a Lamb Estate populated exclusively with bright research­ oriented people, Benoit always stood out. His thinking was always fresh, and I enjoyed talking with him about any subject, whether technical, poli­ tical, or historical. He introduced me to the idea that distributions having infinite second moments could be more than a mathematical curiosity and a source of counter-examples. This was a foretaste of the line of thought that eventually led to fractals and to the notion that major pieces of the physical world could be, and in fact could only be, modeled by distrib­ utions and sets that had fractional dimensions. Usually these distributions and sets were known to mathematicians, as they were known to me, as curiosities and counter-intuitive examples used to show graduate students the need for rigor in their proofs.