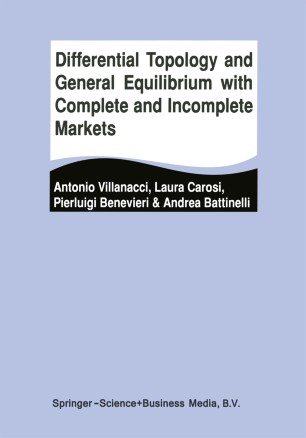 Differential Topology and General Equilibrium with Complete and Incomplete Markets

General equilibrium In this book we try to cope with the challenging task of reviewing the so called general equilibrium model and of discussing one specific aspect of the approach underlying it, namely, market completeness. With the denomination "general equilibrium" (from now on in short GE) we shall mainly refer to two different things. On one hand, in particular when using the expression "GE approach", we shall refer to a long established methodolog­ ical tradition in building and developing economic models, which includes, as of today, an enormous amount of contributions, ranging in number by several 1 thousands • On the other hand, in particular when using the expression "stan­ dard differentiable GE model", we refer to a very specific version of economic model of exchange and production, to be presented in Chapters 8 and 9, and to be modified in Chapters 10 to 15. Such a version is certainly formulated within the GE approach, but it is generated by making several quite restrictive 2 assumptions • Even to list and review very shortly all the collective work which can be ascribed to the GE approach would be a formidable task for several coauthors in a lifetime perspective. The book instead intends to address just a single issue. Before providing an illustration of its main topic, we feel the obligation to say a word on the controversial character of GE. First of all, we should say that we identify the GE approach as being based 3 on three principles .