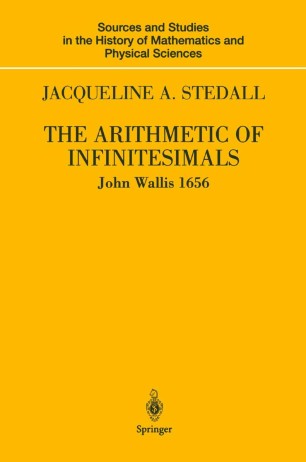 The Arithmetic of Infinitesimals

John Wallis was appointed Savilian Professor of Geometry at Oxford University in 1649. He was then a relative newcomer to mathematics, and largely self-taught, but in his first few years at Oxford he produced his two most significant works: De sectionibus conicis and Arithmetica infinitorum. In both books, Wallis drew on ideas originally developed in France, Italy, and the Netherlands: analytic geometry and the method of indivisibles. He handled them in his own way, and the resulting method of quadrature, based on the summation of indivisible or infinitesimal quantities, was a crucial step towards the development of a fully fledged integral calculus some ten years later.

To the modern reader, the Arithmetica Infinitorum reveals much that is of historical and mathematical interest, not least the mid seventeenth-century tension between classical geometry on the one hand, and arithmetic and algebra on the other. Newton was to take up Wallis’s work and transform it into mathematics that has become part of the mainstream, but in Wallis’s text we see what we think of as modern mathematics still struggling to emerge. It is this sense of watching new and significant ideas force their way slowly and sometimes painfully into existence that makes the Arithmetica Infinitorum such a relevant text even now for students and historians of mathematics alike.

Dr J.A. Stedall is a Junior Research Fellow at Queen's University. She has written a number of papers exploring the history of algebra, particularly the algebra of the sixteenth and seventeenth centuries. Her two previous books, A Discourse Concerning Algebra: English Algebra to 1685 (2002) and The Greate Invention of Algebra: Thomas Harriot’s Treatise on Equations (2003), were both published by Oxford University Press.