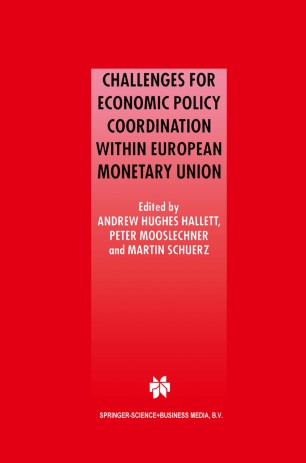 The launch of European Monetary Union (EMU) marked the beginning of a new era, and its establishment has proved an impressive success at the technical, legal, and procedural level. After all, EMU has accelerated economic and political integration in the European Union and tied the economies of the Member States closer together. However, the performance of the euro, high unemployment rates, uneven output and investment growth, and the issue of structural reforms that have yet to be tackled have raised questions about the performance of EMU in practice.
There is a general consensus on the justification for economic policy coordination. The existing literature on economic policy coordination, however, seems far from able to provide robust conclusions about how to organize the necessary interaction of institutions and policies. Therefore, there seems to be a case for re-examining the subject under the new framework set by EMU.
The objective of such a reassessment is to enhance the understanding of what type of coordination and what institutional setting for policy coordination can be expected to be most favorable. Challenges for Economic Policy Coordination within European Monetary Union provides an intellectually stimulating contribution to the ongoing debate.