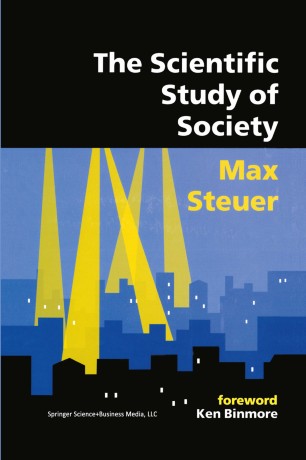 The Scientific Study of Society

Tradition recognises five social sciences: anthropology, economies, social psychology, sociology, and political science. But who knows what is going on in all five disciplines? Social scientists from one discipline often know little or nothing about the progress made by social scientists from another discipline working on essentially the same social problem. Sometimes, even of a neighbouring discipline is terra incognita. the methodology The problem becomes worse when we widen the remit to natural scientists and engineers. I have found little evidence myself that they see themselves as standing on the other side of an unbridgeable golf between two cultures. They observe the intellectual excesses of those few 'newage' social scientists who see themselves fighting a 'science war', but the ignorance of these innumerate critics is so apparent in their grossly naive attacks on natural science, that they are not taken seriously. However, although natural scientists appreciate that most social science is genuine science, they seldom know much about how and why it is done as it iso This can lead to serious inefficiencies in areas in which the traditional frontiers between social and natural science are melting away. An example is the frontier between the economies of imperfeet competition and evolutionary biology. Reversing the usual bias, the evolutionary biologists commonly know little mathematics, and hence find the game theory literature hard to read, with the result that they often spend their time re-inventing the wheel.