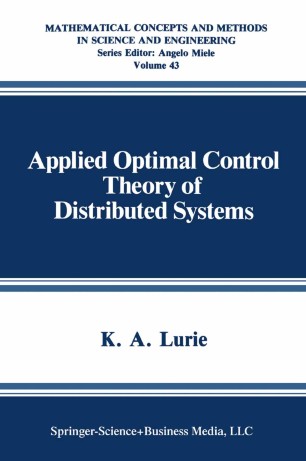 Part of the Mathematical Concepts and Methods in Science and Engineering book series (MCSENG, volume 43)

This book represents an extended and substantially revised version of my earlierbook, Optimal Control in Problems ofMathematical Physics,originally published in Russian in 1975. About 60% of the text has been completely revised and major additions have been included which have produced a practically new text. My aim was to modernize the presentation but also to preserve the original results, some of which are little known to a Western reader. The idea of composites, which is the core of the modern theory of optimization, was initiated in the early seventies. The reader will find here its implementation in the problem of optimal conductivity distribution in an MHD-generatorchannel flow.Sincethen it has emergedinto an extensive theory which is undergoing a continuous development. The book does not pretend to be a textbook, neither does it offer a systematic presentation of the theory. Rather, it reflects a concept which I consider as fundamental in the modern approach to optimization of dis­ tributed systems. Bibliographical notes,though extensive, do not pretend to be exhaustive as well. My thanks are due to ProfessorJean-Louis Armand and ProfessorWolf Stadler whose friendly assistance in translating and polishing the text was so valuable. I am indebted to Mrs. Kathleen Durand and Mrs. Colleen Lewis for the hard job of typing large portions of the manuscript.