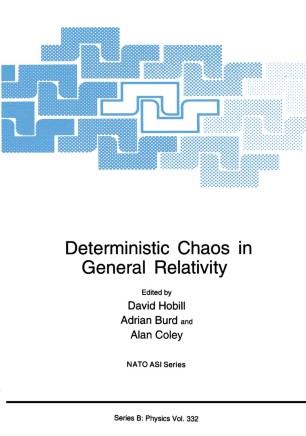 Nonlinear dynamical systems play an important role in a number of disciplines. The physical, biological, economic and even sociological worlds are comprised of com­ plex nonlinear systems that cannot be broken down into the behavior of their con­ stituents and then reassembled to form the whole. The lack of a superposition principle in such systems has challenged researchers to use a variety of analytic and numerical methods in attempts to understand the interesting nonlinear interactions that occur in the World around us. General relativity is a nonlinear dynamical theory par excellence. Only recently has the nonlinear evolution of the gravitational field described by the theory been tackled through the use of methods used in other disciplines to study the importance of time dependent nonlinearities. The complexity of the equations of general relativity has been (and still remains) a major hurdle in the formulation of concrete mathematical concepts. In the past the imposition of a high degree of symmetry has allowed the construction of exact solutions to the Einstein equations. However, most of those solutions are nonphysical and of those that do have a physical significance, many are often highly idealized or time independent.