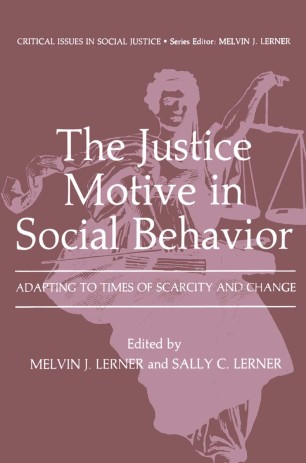 The Justice Motive in Social Behavior

Adapting to Times of Scarcity and Change

This volume was conceived out of the concern with what the imminent future holds for the "have" countries ... those societies, such as the United States, which are based on complex technology and a high level of energy consumption. Even the most sanguine projection includes as base minimum relatively rapid and radical change in all aspects of the society, reflecting adaptation or reactions to demands created by poten­ tial threat to the technological base, sources of energy, to the life-support system itself. Whatever the source of these threats-whether they are the result of politically endogeneous or exogeneous forces-they will elicit changes in our social institutions; changes resulting not only from attempts to adapt but also from unintended consequences of failures to adapt. One reasonable assumption is that whatever the future holds for us, we would prefer to live in a world of minimal suffering with the greatest opportunity for fulfilling the human potential. The question then becomes one of how we can provide for these goals in that scenario for the imminent future ... a world of threat, change, need to adapt, diminishing access to that which has been familiar, comfortable, needed.