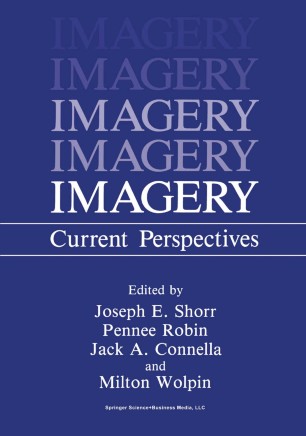 The fifth volume of Imagery emanates from the matrix of presentations offered after the conventions of the American Association for Mental Imagery for the years 1987 and 1988. The first meeting was held in Toronto; the second at Yale University. An overview of the presentations covered such a variety of subjects that we thought the subtitle would be most appropriately--Current Perspectives. For the first time in five volumes, two contributions are related to anthropological imagery by Caughey and Brink. John Caughey, whose book, Imaginary Social Worlds pioneered the social psychology approach to the silent inner imagination, offers a fine chapter in anthropological imagery of his own experiences with Sufi mystics in Pakistan and Micronesian Islanders in the Western Pacific compared to middle-class Americans. Nicholas Brink follows with a chapter on "The Healing Powers of the Native American Medicine Wheel. " Theoretical studies with interesting experimental designs are presented by Huneycutt, 'fA Functional Analysis of Imagined Interaction Activity in Everyday Life" by Kunzendorf and Hoyle on "Auditory Percepts, Mental Images and Hypnotic Hallucinations: Similarities and Differences in Auditory Evoked Potentials"; and by Giambia and Grodsky on "Task-­ Unrelated Images and Thoughts While Reading. " The relationship between creativity and mental imgery is presented by H. Rosenberg and W. Trusheim entitled, "Creative Transformations: How Visual Artists, Musicians and Dancers Use Mental Imagery in Their Work," and Colalillo-Kates discusses "Dreamjourneys: Using Guided Imagery and Transformational Fantasy With Children.