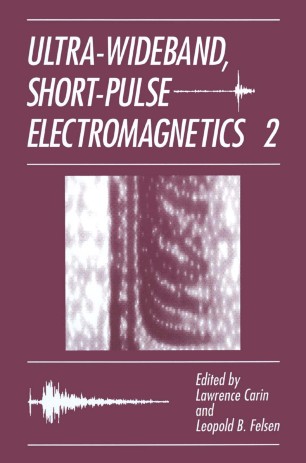 The papers published in this volume were presented at the Second International Conference on Ultra-WidebandiShort-Pulse (UWB/SP) Electromagnetics, ApriIS-7, 1994. To place this second international conference in proper perspective with respect to the first conference held during October 8-10, 1992, at Polytechnic University, some background information is necessary. As we had hoped, the first conference struck a responsive cord, both in timeliness and relevance, among the electromagnetic community 1. Participants at the first conference already inquired whether and when a follow-up meeting was under consideration. The first concrete proposal in this direction was made a few months after the first conference by Prof. A. Terzuoli of the Air Force Institute of Technology (AFIT), Dayton, Ohio, who has been a strong advocate of time-domain methods and technologies. He initially proposed a follow-up time-domain workshop under AFIT auspices. Realizing that interest in this subject is lodged also at other Air Force installations, we suggested to enlarge the scope, and received in this endeavor the support of Dr. A. Nachman of AFOSR (Air Force Office of Scientific Research), Bolling Air Force Base, Washington, D.C.